Skip to content
Home » BLOG » Zachary’s Story: How It All Began

I can tell you this much— I had no idea rats ate potatoes. But that soon changed when a friend told me about the case of the disappearing potatoes in their bakeshop.

This is how it went down. One morning, the baker discovered that all his potatoes had disappeared. All that was left on the floor was an empty burlap sack.

His first instinct was to ask the staff if they knew anything about the potatoes that had vanished. They all said the same thing—they knew nothing about the missing potatoes.

The baker was perplexed and didn’t know what to think. How could a sackful of potatoes just disappear in thin air? Was there a thief among his staff? But, why would anybody steal potatoes, of all things? How peculiar, he thought.

The baker decided to let it go and not think about it anymore. After all, they were only just potatoes. It was a good idea at the time. Everything went back to normal and the missing potatoes simply got forgotten.

One eventful morning, as the staff slowly trickled into the bakeshop, a horrible stench greeted them upon their arrival. It was the stench of something rotting! They could hardly breathe, so they started looking for the source of the awful smell. They looked everywhere— high and low. And they found nothing!

The baker finally arrived and did his own scrutiny. To his immense surprise, he found a little gap in the corner of his tiny bakeshop. A gap that was conveniently hidden behind a massive vat.

He called a carpenter in to assess the situation and remove the floorboards so they could take a look at what was underneath. And the carpenter did exactly that!

Guess what they found?

POTATOES! All the potatoes that had disappeared were underneath the floorboards and were starting to rot. They had roots growing on them. And they stank!

But, that’s not all. What else did they find underneath?

They found all the potatoes in one tidy pile. Next to the potatoes, they found a nice little bed made of fabric that had been cut (more like bitten) into thin long strips, piled on top of each other to make a soft, comfortable little bed, fit for a rodent. Beside it was a half-eaten chocolate bar.

This was more than enough proof that someone had been living under the floorboards of that small bakeshop. But where was the occupant? 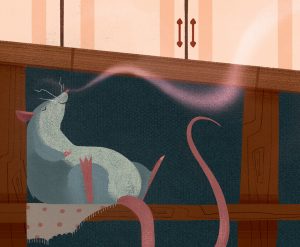 He was nowhere to be found. Not that day anyway. So, they cleaned everything and got rid of all the rotting potatoes. The carpenter fixed the floorboards and sealed the gap in the corner as well.

All was good again…

Until the following day when the baker saw a lone rat trying to find his way back to his home through the gap that had once been there.

Well, the baker knew it was the unwanted guest that had been living underneath his floorboards.

And with that, Zachary’s story was born.

It was a happy ending for the bakeshop. No more disappearing potatoes after that.

And in my book, did Zachary get a happy ending? Well, let’s just say I had to embellish it a bit. It is a book for children after all. And I truly believe my version of the story is what Zachary would have preferred.

Thank you for dropping by, and I hope you and your child will enjoy reading Zachary and the Great Potato Catastrophe.